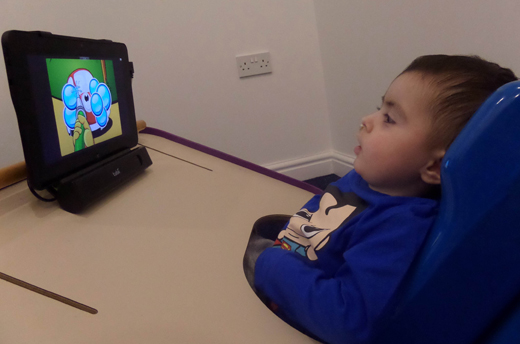 Macsen, my son, is a very early eye gaze user. He had his assessment at 18 months and his own Tobii system at home a few months later. Macsen has physical restrictions due to his whole body Cerebral Palsy and his brain has difficulty processing images due to his Cortical Visual Impairment. Although he has these restrictions Macsen shows understanding, feelings and intelligence. We believe that eye gaze AAC has real potential for giving Macsen a voice in the future.

After a quick demo we knew that Look to Learn was the software for Macsen!

We are currently developing skills in the first 4 stages of the learning curve. Macsen started developing these skills with Sensory Guru’s EyeFX using games like Pop, Splat and Splodge. For his second birthday we were looking for another software package that would build on his progress and stimulate his interest. After a quick demo we knew that Look to Learn was the software for Macsen.

Macsen’s has 3 favourite activities. He dips into the others from time to time, but as his CVI improves with familiar objects we use these as our main stable.

Custard Pies
This is a fun activity which starts with a clear screen with a circle containing a familiar face. When he finds the face a hand comes from off screen and throws a custard pie! The animation is fun, but most importantly for Macsen the action is comes with a funny splatting sound. Audial confirmation is very important for Macsen as hearing is his strongest sense. We are also able to customise the activity, so he is looking for familiar faces, which include Elmo, Mario and finally (and I’m sure most satisfyingly) his big brother!

Reveal Shapes
In this activity Macsen is faced with a screen full of overlapping images. These range from coloured blocks to hearts and jigsaw pieces, but in every case they are very bright and interesting. As he looks at a piece of the puzzle it will disappear to reveal part of a familiar picture underneath. This works well for Macsen and we generally use this as his first activity as the brightness it catches his eye. We use this activity along with questions to help develop and assess his understanding of the around him. For example if he reveals a person’s nose we will say: “can you find his hair” and we will watch for him to move towards the top of the screen. 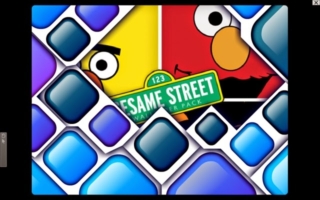 Hose
This is Macsen’s favourite activity and he is clearly excited every time it comes on. As soon as we say: “let’s wash the car” he bursts into laughter! In this activity he is in control of a hose pipe and wherever he looks the hose moves. He loves washing bubbles off the red car, putting out fires and splatting bugs. He finds others a little more challenging as the contrast is not as clear such as watering the white flowers, but we help him with those ones!

Macsen loves Look to Learn as it’s bright, colourful, interactive, age appropriate (not babyish) and most importantly for Macsen has been created with a sense of humour! 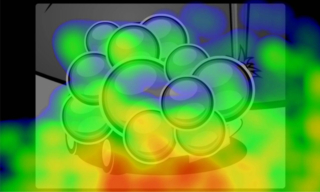