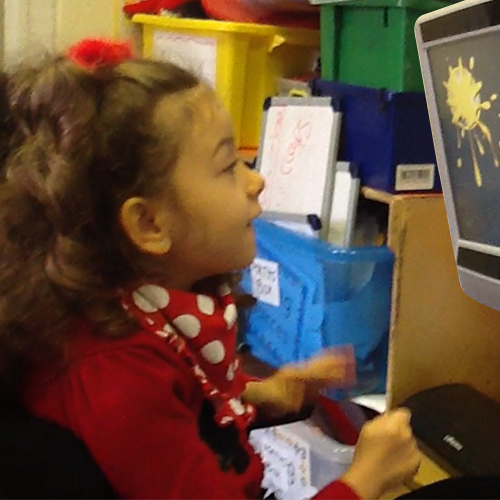 Meet Ruby, a young girl with Rett Syndrome who has been achieving wonderful things with eye gaze. Trish Davidson is the Team Leader for CENMAC – an organisation that supports assistive technology in education. She has been working with Ruby for the past year and has written about her progress using Look to Learn and AAC as part of her daily routine:

“Ruby is a year 3 student attending mainstream school in London. The school provided Ruby with access to assistive technology since starting school to help aid her development. Living with Rett’s, it was felt that AAC would help Ruby’s development but, to start with, Ruby didn’t really show any interest in its use.

Last year I attended a seminar at Communication Matters which focused on the use of eye gaze with children with Rett’s and how successful it is in helping with access. After putting in the successful bid for a PCEye Go, we purchased the camera along with the Look to Learn software. The equipment arrived at the school in mid-February.

Through analysis of her activities we can see that Ruby is able to focus on the ‘hotspots’ on the screen.

We were able to contact the support team at Smartbox who were able to help us through some initial setup problems to get us up and running! Ruby used the system every day, sometimes twice a day, working on each exercise for up to 5 minutes which is fantastic progress given her initial lack of interest.

Through analysis of her activities we can see that Ruby is able to focus on the ‘hotspots’ on the screen. For example, in the farmyard activity, she knows to focus on the barn door to make the farm animals appear. Ruby particular likes the activity where she picks what the boy eats for his dinner, consistently picking the worm making the boy turn green and change into a monster! This is what I call a result!

Although Ruby is largely focused on cause and effect, she is starting to move to choosing and selecting which is a tremendous step forward from a girl who was reluctant to even try AAC to begin with.

And, even better, Ruby’s family took the eye gaze with them to their caravan over the Easter holiday – what a result!”