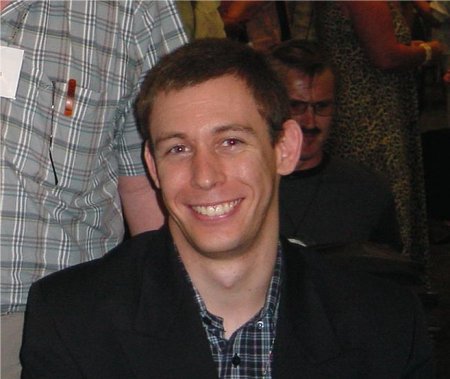 Working in the field of AAC is a privilege. Over the years we have helped thousands of people to communicate, access computers and achieve many things that wouldn’t have been possible without technology. So many of these people have been an inspiration to us and the work we do.

Smartbox has made an immeasurable difference to my life.

We first met Martin Pistorius back in 2001 when our founders, Paul and Alyson, went to South Africa to meet a reseller of our AAC software. Since that meeting, Martin’s story has always stayed with the company and new staff are told about Martin to help them understand the importance of what we do.

In 2011, Martin was a plenary speaker at Communication Matters. He used his device to speak to hundreds of people that day and anyone that was there will remember his talk and will have been inspired by his achievements.

Martin has kindly written his story for our website.

Martin’s story in his words

Life for me began as a normal happy, healthy child until the age of 12 when a brain infection changed everything! It left me trapped inside my body and unable to communicate. As a result I spent the next 14 years of my life in institutions for the profoundly, intellectually and physically disabled. Everyone believing I didn’t really understand anything.

Starting out with AAC

However, my life began to change in 2001 when a person who was caring for me at the time happened to see a program about AAC on television. This set a chain of events in motion that ultimately led to where I am today. I went for an AAC assessment, where it was discovered that not only did I have the ability to communicate but that I understood far more than was originally believed. Suddenly my parents and I were thrust into the world of AAC.

I was living in South Africa at the time. The limited number of dedicated AAC devices available at the time, all needed to be imported from either the USA or UK at a prohibitive cost. AAC devices were not covered by medical insurance either. Following a sequence of events we eventually decided on purchasing a standard laptop and dedicated AAC software. This was not only significantly cheaper but meant that it could be locally maintained.

Little did I know at the time, when I first started using Winspeak and Hands-off (predecessors to The Grid), what a difference it would make to my life. Learning how to become a proficient communicator through the use of AAC was exciting but really challenging! However, finally having the ability to communicate meant that I could express my wants, needs and thoughts.

A few months after I had been using Winspeak and Hands-off, The Grid 1 was introduced. I received a free upgrade and this sparked a long standing relationship with the wonderful people at Smartbox. Paul, Alyson and especially Barney Hawes and I exchanged many e-mails over the years.

In 2003 I stopped going to the care centre and started working. A new adventure had begun and looking back on it now, it’s been quite a ride. Lots of highs and lows, joys and tears along the way – it is sometimes hard for me to believe all that has happened in a little over a decade. Smartbox products have been there with me every step of the way. They have enabled me to work, give presentations all over the world, lecture, study, write my book (Ghost Boy) and communicate with friends and family. Possibly most important they enabled me to propose to my wife and later to say my wedding vows.

Smartbox have, and continue to be, an integral part of creating a life worth living

From Winspeak, The Grid, The PowerBox to Grid Player, Smartbox have, and continue to be, an integral part of creating a life worth living – for that I will be eternally grateful!

It has been a pleasure for us to work with Martin over the years and to see him grow and develop his communication skills. We are now just as likely to see him making a TV appearance as in person!

Martin has written a full account of his amazing story in an autobiography entitled ‘Ghost Boy’. It was described by The Sunday Times as “A deeply affecting and at times shocking book… The Diving Bell and The Butterfly but with a happy ending”

You can order a signed copy from Martin’s website.